An excerpt from the new book by P.I. Kapllani. See author’s note at end of excerpt.

It was right after midnight, when the first gunshots were heard in the little town of Paramythia. Abedin Shahini turned around in his matrimonial bed and opened his eyes, but did not understand what was going on. He stretched out his arm in the darkness and touched his wife, who was still sleeping, her body cradling their little son. Even though she was still asleep, she wrapped her arms around the little boy, as if she were trying to protect him from the unknown. Their son Muharrem was not even ten-years-old.

Abedin felt weak, as he placed both hands on the bed and got up. He lit a candle and looked outside, eager to know what was going on. He could see the town’s main square clearly. The clock tower was showing 1:00 a.m. He could hear gunshots in the distance. After a few minutes a strong explosion burst out, shaking the stone foundation of the three-storey tower which belonged to Shahini’s family.

His wife jumped out of bed, frightened, as the ten-year-old boy screamed. Abedin grabbed both of them at once, and all three of them fell on the hardwood floor, holding their breath. They lay in each other’s arms for several minutes, until the gunshots dispersed in the darkness. 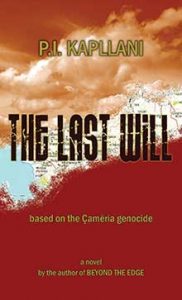